George David Doudney was the son of Edward Philips Doudney who traded with his other sons Edward and John from 49, Lombard Street. George David, however, set out on his own at 97 Fleet Street, corner of Bride Lane. At some point he entered a partnership with his brother James, but it is unclear exactly when. James and George traded as the Doudney Brothers and occupied several premises in London. When they dissolved the partnership in 1848, 97 Fleet Street, 25 Burlington Arcade and 17 Old Bond Street are listed. When Street View number 7 came out in c. 1838, however, 17 Old Bond Street was occupied by Edward Smallwood and that was still the case in 1840.(1) The other address listed, 25 Burlington Arcade, and the neighbouring number 24, were occupied (Street View 71) by one Simon, a hosier, so presumably the extension of the business had occurred somewhere between 1840 and 1848.

While it lasted, the brothers in Fleet Street were quite well-known and even the subject of a poem:

The Lay of the Doudney Brothers

Coats at five-and-forty shillings! trousers ten-and-six a pair!
Summer waistcoats, three a sovereign, light and comfortable wear!
Taglionis, black or colored, Chesterfield and velveteen!
The old English shooting-jacket, – doeskins, such as ne’er were seen!
Army cloaks and riding-habits? Write to Doudney’s by the post.
Doudney Brothers! Doudney Brothers! Not the men that drive the van,
Plaster’d o’er with advertisements, heralding some paltry plan,
How, by base mechanic measure, and by pinching of their backs,
Slim attorneys’ clerks may manage to retrieve their Income-tax:
But the old established business – where the best of clothes are given
At the vey lowest prices – Fleet-street, Number Ninety-seven.
Would’st thou know the works of Doudney? Hie thee to the thronged Arcade,
To the park upon a Sunday, to the terrible Parade.
There, amid the bayonets bristling, and the flashing of the steel,
When the household troops in squadrons round the bold field-marshals wheel,
Should’st thou see an aged warrior in a plain blue morning frock,
Peering at the proud battalion o’er the margin of his stock, –
Should thy throbbing heart then tell thee, that the veteran, worn an gray,
Curbed the course of Bonaparte, rolled the thunders of Assaye –
Let it tell thee, stranger, likewise, that the goodly garb he wears
Started into shape and being from the Doudney Brothers’ shears!
Seek thou next the rooms of Willis – mark, where D’Orsay’s Count is bending,
See the trousers’ undulation from his graceful hip descending;
Hath the earth another trouser so compact and love-compelling?
Thou canst find it, stranger, only, if thou seek’st the Doudneys’ dwelling.
Hark, from Windsor’s royal palace, what sweet voice enchants the ear?
“Goodness, what a lovely waistcoat? Oh, who made it, Albert, dear?
‘T is the very prettiest pattern! You must get a dozen others!”
And the Prince, in rapture, answers – “‘T is the work of Doudney Brothers!”(2)

The Bayerische Staatsbibliothek, München has an advertisement booklet in their collection with the premises in Old Bond Street depicted and the proud announcement of the brothers that they have “purchased the splendid and spacious premises known as the Alexandrian Institution” (see here). The library dates it to 1830, but it must be dated to the 1840s. One of George’s first advertisements (that is, without brother James mentioned) is for dress waistcoats, but other items of gentlemen’s clothing could also be provided from 97 Fleet Street. 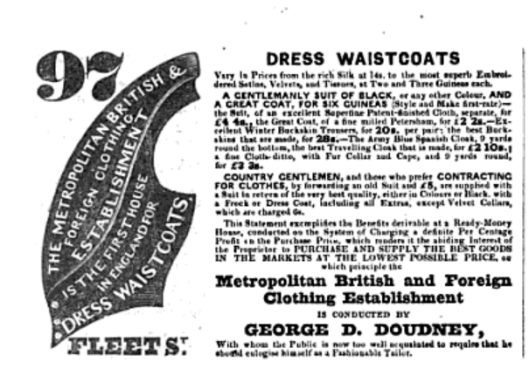 In 1835, George even embarked on his very own monthly advertisement sheet. One side of the sheet showed a natty gentleman, obviously dressed in the best Doudney could provide.

On the reverse of the sheet, Doudney explains that he wants to bring the latest fashion news to his customers and he will attempt “in executing the orders with which he may be honoured, to provide himself with every new material as it appears, and the very best cloths, which will be supplied as low as possible.” He lists some of the items and the prices for which they could be obtained from his establishment, for instance, a dress coat of the finest black or blue cloth, costs £3 15s, other colours £3 5s, black dress trousers are £1 14s, and a morning waistcoat could be had from 14s to 17s. All very interesting, but the last sentence on the sheet merits a closer look. “G.D.D. begs to call the attention of the public to his new mode of measuring for trousers, by means of which he is enabled to produce a superior fit”. Look back to the elevation at the top of this blog post and note that on the building is written “Inventor of the andrometer”. You may well ask what in heaven’s name an andrometer is – that was my question as well – but it turns out to be some sorts of measuring device with which the contours of the body can be accurately measured in order to produce a pattern for whatever item of clothing is required. Whether Doudney was the actual inventor is, I think, open to debate, but I have found an illustration of an andrometer to give you some idea of the contraption.

In the Report of the Committee appointed by the Society of Arts for Scotland, one James Macdonald, a tailor of Edinburgh, is awarded the Society’s Gold Medal for his drawing and description of an andrometer, “an instrument for taking the dimensions of the human body, with precision, for the purpose of fitting it, to absolute nicety, with clothes”.(3) Macdonald had been awarded a large clothing contract with the army and he needed to take measurements of many soldiers quickly and accurately, hence the andrometer. The andrometer in the illustration was modelled on Macdonald’s.(4)

Now, who was first? Macdonald or Doudney? MacDonald exhibited his andrometer on 20 March 1833 to the Committee. When exactly Doudney ‘invented’ his contraption – or that it even resembled that of Macdonald – is unclear. He certainly mentioned a new way of measuring in his 1835 fashion sheet, but he does not say how he was going to take the measurements. Only in the Street View (published at least five years later that the medal ceremony) is the word andrometer mentioned. My money is on Macdonald, but that may be solely because of lack of evidence on Doudney’s primacy.

Career change
Now we come to a surprising development in the life of George David Doudney. On 4 November 1847, the partnership between George and his brother James is dissolved(5)and in the Street View Supplements (±1847), 97 Fleet Street is empty. George and his tailoring business cannot be found at another address and seemed to have disappeared, but the records of Cambridge University reveal what happened to him afterwards.

George was admitted sizar at Corpus Christi on 23 December, 1846, and a pensioner one year later. He preached his first sermon on 21 January, 1848 at Clapham Asylum.(6) Well, how is that for a career change? There is no confusion with another person of the same name, as the record clearly state that the new student had been a tailor at 97 Fleet Street. After his study, Doudney went to Ireland as a missionary and was ordained a deacon in 1849 and priest in 1851. He became the incumbent of Dunlewey, Donegal, and learned the Irish language. After a number of years, he transferred to the Episcopal chapel of Charles, Plymouth. He died on 19 May 1865 and probate was granted to Sarah Lane Doudney, his widow.(7) The announcement about his decease in the Hampshire Telegraph states that he died in his house, named after his Irish parish Dunlewey, and that his death led to the “inexpressable grief of his congregation and friends”.(8) Several of Doudney’s sermons made it into print: Sermons preached at Charles’ Chapel (1866), The Gospel Cottage Lecturer (several volumes from 1855 onwards); and Recollections and remains of the late Rev. George David Doudney (1866). This last book was edited by David Alfred Doudney, his cousin and brother-in-law who made a similar career switch, from printer to priest.