The London Gazette of 7 March, 1837 included a notice that William Dakin, Thomas Ridgway, Arthur Dakin and Robinson Bywater had dissolved their partnership of tea-dealers and grocers in Coventry by mutual consent. This in itself is not a very unusual notice, the newspapers frequently showed similar announcement, but in this case it gives us more information on the business dealings of Thomas Ridgway. The Ridgway company, which still exists, states on their website that Thomas opened his first shop in London in 1836. Wikipedia tells us that he had a shop in the Bull Ring, Birmingham before that, but that he went bankrupt and started again in London. He was certainly in Birmingham in 1830 when Daken [sic] and Ridgway are mentioned as the ones who were going to dispose of the stock in trade of the bankrupt Samuel Partridge, tea-dealer and grocer.(1) At the time of the Bull Ring Riots (1839), the Dakins still had a large shop in Birmingham at 28, High Street.(2) How Dakin and Ridgway ended up in Coventry is not clear, but what is clear is that Ridgway set up in King William Street, London in the 1830s and the Dakins a bit later at 1 St. Paul’s Churchyard.(3) 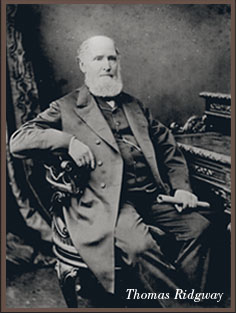 Tallis’s Street View shows the lettering “Ridgeway Sidney & Co. Tea Importers” across the premises of numbers 4 and 5, but despite the grand shop and the lettering, Ridgway & Co did not put an advertisement in the Street View. Who Sidney was, I have no idea, and that name seems to have disappeared quite quickly from the business. Thomas Ridgway himself, however, makes a huge success of his London grocer’s business and in 1851, he was one of the coffee importers who met at the London Tavern in March 1851 to condemn the 1840 Treasury Minute which allowed for the adulteration of coffee with chicory and resulted in fraud and high prices. The meeting led to questions asked in Parliament.(4)

Eventually, Ridgway & Co. specialised in just tea, tracking down new varieties from all over the world to use in their high quality blends. In 1886 they received a request by Queen Victoria for a personal blend and they were later appointed tea merchants to King George VI. Ridgway’s became one of the first tea companies to sell their produce pre-packed against adulteration.

Thomas was born in 1802 in Lymm, Cheshire according to the 1851 census which sees him living with his wife Lucretia, a butler, a cook, a housemaid, a laundry maid and a nurse at 27 Oxford Square, London. However, on 3 June 1855, the couple were both baptised in North End Baptist Chapel, Towcester, Northamptonshire. The chapel had been opened in October 1853 and was built on land belonging to Thomas.

His native town of Lymm also received the benefit of a Baptist Chapel from Ridgway. Here again it was built on land he owned. That chapel opened in 1850 and the first pastor was Isaac Ridgway, Thomas’s brother.(5)

Thomas, by now classed as retired tea merchant, and his wife Lucretia lived at Elm Lodge, Towcester, where Lucretia died in October 1862. Before that, at the time of the 1861 census, they had a holiday in Wisbech where they stayed at the Rose and Crown Hotel, 23 Market Place, which still exists. Thomas remarried (at Liverpool) in 1864 to Cordelia Dawbarn who was also received into the Baptist Church. In 1871 and 1881, the census tells us that Thomas and Cordelia were living at Elm Lodge, Daventry Road with six servants. Thomas died at Elm Lodge on 20 August 1885 and was buried in Lymm, his place of birth. One Edward Parker preached a funeral sermon Christ living and dying: A memorial sermon for the late Thomas Ridgway, Esq., of Elm Lodge, Towcester : preached in the North End Baptist Chapel, Towcester, September 6th, 1885. When his estate was proved, Thomas was worth £58,523 8s. 3d.(6) Cordelia apparently did not live up to the moral expectations of the Baptist community, as in 1887, she and four others came under “careful consideration” and were “no longer recognised as members”.(7)